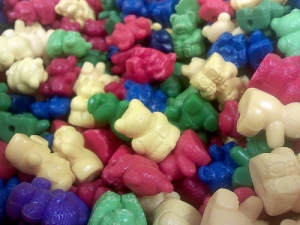 When Miss M was about four and a half, I decided I wanted some of kind of curriculum to guide me as she progressed beyond simple counting.  I knew I wanted a program that would keep things fun, and would involve little to no handwriting, since at that time, Miss M struggled to write any numbers at all.  A friend had a copy of Saxon Math K that I was able to take a look at. I saw that this program involved no writing, and had scripted lessons for the parent to follow.  I soon found a used copy, bought a few inexpensive manipulatives, and began progressing through the lessons with Miss M.

The lessons in Saxon Math K are fun, and (in my non-professional opinion), age-appropriate for an older preschooler or younger kindergartener.  We started working on a calendar, we used plastic bears to count, add and make patterns and we reviewed shapes.  But something quickly became clear to me — the way Saxon Math K jumped around from topic to topic drove me crazy!  We would spend a day working on counting, only to have the next lesson focused on shapes, followed by a third lesson on a topic altogether different before returning to a lesson on counting.   I tried to make my own plan for re-arranging the lessons in a way that would involve less jumping around, but it was a lot of work to do so.   After using Saxon for a couple months, I knew that when Miss M started her Kindergarten year I needed to have something else.

As I researched math curricula, I learned that math programs generally either follow a “spiral” philosophy or a “mastery” philosophy.  Some may be more extreme than others in the degree to which they follow these philosophies.   Programs that lean toward the spiral philosophy introduce several topics, then “spiral” back to the first, second and so on to give the student greater depth and more exposure, then the cycle repeats.  Spiral programs have lots of built in review, and keep students from getting bored by varying the topics studied.  Some students, however, may be frustrated by only getting a taste of a topic and not having time to develop a skill before moving on to another topic.

The mastery philosophy is just what it sounds like — mastering one topic before moving on to the next.   Curricula that follow the mastery philosophy will also tend to pursue a topic to greater depth before pursuing a new topic.  For example, instead of moving on to single digit subtraction after single digit addition is mastered, a mastery curriculum is more likely to continue to two, three and four digit addition before introducing subtraction.  At the extreme a mastery curriculum may have the student studying the same general topic like addition or subtraction for an entire level of the curriculum.  Common criticisms of mastery curricula are boredom and lack of review.  Students may get burnt out studying subtraction for months on end, and may forget some of their adding skills in the mean time.

Having learned about these approaches to math education, I knew I would prefer a curriculum that leaned toward the mastery approach.  I didn’t think I would like something on the extreme end of the mastery spectrum, but in general the mastery philosophy made more sense to me.

Having ditched Saxon Math K not long before Miss M was beginning her actual Kindergarten year, I wasn’t quite ready to commit to a particular curriculum that I might be using for years.  As a stop-gap measure, I decided to begin K with Kindermath by Eagles Wings, a program I had recently received along with a phonics and spelling package I had purchased.

Kindermath is nice simple program for Kindergarten students.  It doesn’t have any bells and whistles — just a simple teacher manual and student workbook, both in black and white.  But, this gave me something I could do with Miss M for math.  We used it for the first four months of her K year.  After that, we began RightStart — the program we are still using!  I’ll discuss why we chose Right Start and how it works for our family in part 2 (Now posted — read it here!).

If you are looking for more information on how to chose a math curriculum, this article is a great starting point.  I also highly recommend checking out the wealth of resources (including articles and product reviews) at homeschoolmath.net!

What resources have you found helpful in the process of picking a math curriculum?

4 Responses to “How We Picked a Math Curriculum — Part 1”