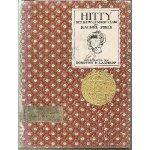 Decades before Buzz and Woody came to life on the big screen, a doll named Hitty had many years of world-traveling adventures before finally residing in an antique store, where she is at leisure to write her memoirs.  I was inspired to add Hitty: Her First Hundred Years by Rachel Field to our read-aloud list after reading Amy’s review at the Newberry Project blog.  “Hitty” won the Newberry medal in 1930.

Hitty is a small doll who was crafted from mountain ash wood in the woods of Maine in the early 19th century.  Her first is owner is the daughter of a whaling ship captain.  Phoebe Preble accompanies her father on a whaling voyage, sending Hitty off to far away lands with her.   Hitty sees her first owner through many ordeals on this journey.  But, as things so often go for well-loved toys that go everywhere with her owners, she is eventually lost.  A fine doll made of mountain-ash wood fares well even through the most difficult of circumstances, however, and Hitty soon finds herself with other owners.  Thus Hitty journeys through the 19th and early 20th century owned by various little girls of differing social positions, as well as being “employed” as a fashion model, a portrait model and even as a prop in the act of a snake charmer!

Miss M and I really loved Hitty…a lot!  This is the kind of book that even after reading a long-ish chapter, we would often look at each other and one of us would say “just one more chapter?”  I really enjoyed the passing of time in this book.  The world and many things in it change, but Hitty fundamentally does not.  She makes her observations of the changes in the world from a sort of “outsiders” perspective as one who sees it but does not really participate.  Something about this grand sweep of time really appealed to me.   It kept me turning the pages to see how the fate would move Hitty on from owner to owner, wondering what situation she would find herself in next.

Hitty does have a flaw, which I hope you can forgive her for.  She is a product of her time, and this book is a product of its time.  So, it is very “non-pc” at various points.  While it didn’t bother me too much to hear Hitty describe natives on a remote pacific island as idol-worshipping savages, this might bother some readers.  I was a little more bothered by Hitty’s description of African Americans in the south in the post-civil wars years of the late 19th century.  While it is probably not too far from accurate as to how black girls of that time might have been thought of or portrayed, I did edit some as I was reading since I was not really prepared to discuss with Miss M right then and there why their skin color was such a big deal.   Racial prejudice is a heavy subject for bedtime.

Despite this small “flaw”, I think Hitty is a book that stands the test of time.  It’s a very enjoyable read-aloud, and it might just make it to the top of the list of my favorite read-alouds for this year.

I’m linking up with: