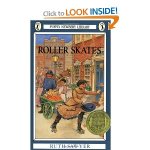 Roller Skates by Ruth Sawyer is a book that surprised me in several ways.  This 1937 Newberry Award winner wasn’t on our read-aloud list.  I intended to start Adam of the Road as our bedtime read-aloud  after we finished Hitty (and we are reading “Adam” now).  But, in browsing the list of Newberry winners, the title of Roller Skates caught my eye as I pondered whether I could make it a goal to complete reading one entire decade of Newberry winners in 2012.  And having read only part of one review, I requested it from the library.

Roller Skates is the story of one year in the life of Lucinda, a ten year old girl in 1890’s New York City.  She is an “orphan” for a year while her parents travel in Italy and leave her in the care of two single women.  Lucinda takes every advantage of the new-found freedom this situation provides.  Her year is spent making all kinds of friends from every social class, reading Shakespeare and, of course, roller skating like wildfire through the city.

I started Roller Skates with pretty high expectations.  A story about the adventures of a young girl taking place in a similar era to my beloved Betsy-Tacy books? That’s something pretty appealing.  However, I was surprised to find myself having a hard time getting “into” the story at first.  Many, many characters are introduced early in the story.  After a while, when Miss M asked me to remind her who a particular person was, I couldn’t recall either and had to look back to discover the identity of this minor character, who turned out to be a neighbor. Some of the early chapters felt long as I read them to Miss M at bedtime.

As the story builds toward the celebration of Christmas and Lucinda’s ambitions to put on a puppet-theater showing of Shakespeare’s The Tempest, the story grew on me more and more. One of my favorite passages in the book comes as Lucinda reflects on the Christmas celebration that she arranged for and with her friends, particularly a little neighbor girl from a poor family named Trinket.

“There is always one Christmas that belongs to you more than than any other–belongs by right of festival and those secret feelings that are never spoken aloud. This Christmas belonged to Lucinda in this way, and I think it belonged to many of her friends. I know it was the only Christmas the Browdowskis [Trinket’s family] kept everlastingly green in their hearts.” (p. 116)

After many mostly happy adventures for Lucinda, I was also surprised to find the story taking on a more serious note toward the end.  It turns out that this story has some passages that I could see upsetting some sensitive children.  Lucinda discovers one of her many friends murdered.  It took me so much by surprise I had to ask Miss M if she was okay after we read about it — she was.  It’s not graphic at all, but I don’t think we’ve really come across anything similar in other books we’ve read.

Lucinda also has an another experience with death late in the story.  I won’t go into too much detail as I think it might spoil the story a bit if you knew what was coming (again, something that might be upsetting if you have a sensitive child).  By the end of the book, you really get the feeling that Lucinda has matured in so many ways.  She is no longer just a carefree girl looking to make the most of being out from under the thumb of parents and governess.  She becomes a young woman who knows what it means to truly care for others and to appreciate the year of freedom experienced.

By the end of the book, I found myself wanting to know more of what happened to Lucinda (though you get the impression that perhaps her future years were not quite as exciting or adventurous as this one was).  It’s the kind of book I want to revisit again with Miss M as she gets older and could perhaps experience it on a bit deeper level.   There’s a lot that could be learned or studied further from this book about city life in the 1890’s, their fashions, views on immigrants and differing social classes, and so on.   For right now Roller Skates is going back to the library, but I could definitely see myself buying this one and adding it to our permanent collection.

I’m linking up with Read Aloud Thursday @ Hope is the Word!

One Response to “Book Discoveries This Week: Roller Skates”