We had a little bit of time to kill last night between dinner and bedtime, and as we often do, we decided to take a short walk around the neighborhood.   Neighborhood walks these days almost always involve a stop at the Little Free Library down the street.   Since we helped get the ball rolling with our Little Free Library by putting about a dozen kids books in since it opened up a couple weeks ago,  I don’t feel too badly grabbing a book to take home even on days that we don’t take a book with us to “exchange.”

Last night was one of those nights — we didn’t bring a book with us, but Vasa Saga: The Story of a Ship by Bertil Almqvist definitely caught my eye.  We all agreed we wanted to take it home. 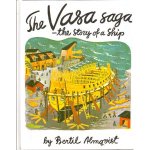 Vasa was a glorious ship built in Sweden in the early 17th century.  It was the pride and joy of Sweden’s king Gustavus II Aldolphus.   The Vasa Saga beautifully illustrates how the ship was built — from the search for wood for the ship and its ornaments, to creating the curved pieces of the ships body uses the technology available at the time.   Unfortunately, the Vasa was a flawed ship and she sank on her maiden voyage out of the harbor.

Much of the book takes place while Vasa is under the water.  She watches on while divers cleverly salvage many of her canons.  Then she sits lonely and forgotten for centuries under the sea near Stockholm.  Her fortunes change in the 1950s when she is once again discovered — and now technology has improved to the point where she can be rescued from the water!

We all really enjoyed reading this story–though Mr. K had waaaay to many questions for us while we tried to read it the first time through!  Miss M grabbed the book this morning for another read without interruptions.  🙂  Of course the kids wanted to know if it was a true story (it is — except for the personification of the ship, of course!).  They also wanted to know if we could go see the ship someday (yes, if we ever make it to Sweden, it is still on display as a museum so we could go see it).

We are thrilled to have found this treasure in our Little Free Library!

I’m linking up with Read Aloud Thursday @ Hope is the Word!

One Response to “Book Discoveries this Week: The Vasa Saga – The Story of A Ship”


Leave a Reply to Amy @ Hope Is the Word Cancel reply