Filed under: Weekly Highlights — kirstenjoyhill @ 9:20 am

I got all the way to Monday morning this week and realized I had never sat down to write a collage/weekly-update post for last week!  We got just a bit distracted over the weekend by this, among other household projects:

Last weekend was a big “milestone” weekend — it seemed like all the boys were growing up a bit.  A co-worker of Tony offered us free bunk beds, and considering we had just been discussing building bunk beds for the bigger boys, we could hardly turn down “free” — all we had to do was buy mattresses and slats (and of course put them together, which was a little tricky since the beds weren’t originally set up to use Ikea slats…but still easier than building a bed from scratch!).  With the boys moving into a bunk bed, Baby J could move in with his brothers!

Over last weekend, Baby J also got his first tooth (#2 came in yesterday morning!) and we also moved him out of his “bucket” car seat into a regular convertible seat.  He’ll be 9 months old next week…hard to believe, time is going by so fast!

Other than those big milestones, we’ve had a lot of regular old summer fun the past couple weeks — playdates with friends and neighbors, trips to the pool and playing outside.  And regular life stuff like trips to the dentist (twice for me, unfortunately since I had to get a cavity filled!).  Miss M also went to my mom’s house for three days for her special one-on-one time with Grandma.

Here are a few highlights of our last two weeks: 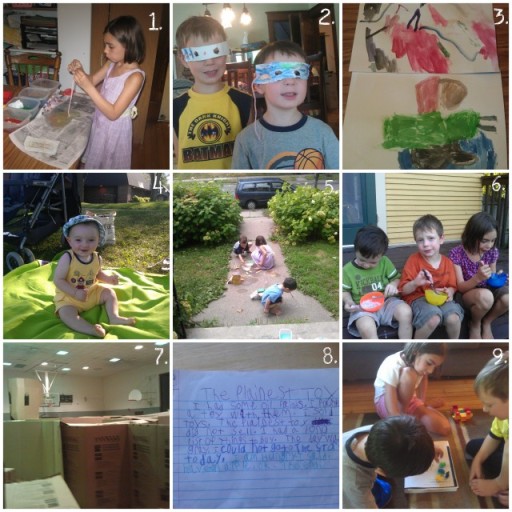 1-3:  My kids always love to do arts and crafts, but we’ve finally had some much-needed rain over the last two weeks so we’ve had extra time for inside activities — during these rainy mornings and afternoons there’s been lots of paper airplane making, origami, water color painting, and paper crafts of all kinds.  I’ve noticed a big change in Mr K’s artwork over the last few weeks – he has finally hit that stage where he actually tries to color in a picture instead of just scribbling on it, and he takes the time to draw/paint things that have some meaning to him.   It was fun to hear him describe a fancy airplane to me that he had drawn in pencil one day.  🙂

4. Last week was the end of tennis for Miss M and soccer for Mr. E.  I never took any pictures of them playing this year! But here’s baby J enjoying watching all the soccer players (while sitting on our new awesome picnic blanket I got on clearance at Target for $5!)

5.  Sidewalk chalk and sidewalk paints, made possible by the now-somewhat-cooler-most-days weather

6. We tried homemade ice cream again, this time with an ice cream maker borrowed from a friend — I found this much easier and more satisfying than the make-it-in-a-bag method!  Here the kids are enjoying their yummy cherry ice cream!

7.  It’s a little hard to see this well in the picture, but this is a giant cardboard maze that filled up the entire gym of our neighborhood park rec center!  A local artists puts on “cardboard camps” at the park where kids build amazing things out of cardboard.  Various weeks’ projects include boats, castles, medieval weapons and this maze.  Some friends participated in the cardboard maze camp and invited our kids to come to the open house. The kids all had a ton of fun getting lost, finding their way out and generally running around the cardboard maze.  I hope they are still running these camps at the park when Mr. E is old enough, because I think he would really get “into” doing one!

8.  and 9.  We’re still mostly on summer break, but we are doing some history reading (no pictures of that), and spelling with Logic of English.  Last week we did all of lesson 4 — in #9 the kids are enjoying a phonogram board game together.  At the end of week wrote an entire story using her spelling words and dictated phrases…with no mistakes! That is huge for her! There were a couple words she wasn’t sure how to spell, but she knew she didn’t know how to spell them and asked for help before writing them down.

Unfortunately after not working on spelling for a few days (due to the trip to Grandma’s house), yesterday’s attempt to start lesson 5 (an assessment and review lesson), produced a giant meltdown/disrespectful behavior and mistakes on words I know that Miss M could spell last week.  Sigh. When she is thinking with a clear head, Miss M tells me that LOE Essentials is a great spelling curriculum.  When she’s frustrated though…boy watch, out. I think we need lots of consistent practice…and continued discussions about both appropriate behavior during school time and how to communicate frustrations.

Today we’re heading out for a “field trip” to a local historical site, and then we have a church conference this weekend.  Hope you have a great weekend too!

I’m linking up to Collage Friday and the Weekly-Wrap Up!

3 Responses to “Collage Friday: Growing Up and Having Fun”