Book Discoveries this Week: The Witch of Blackbird Pond October 12, 2012 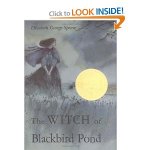 Miss M and I continued our reading in the Puritan era of New England with The Witch of Blackbird Pond by Elizabeth George Speare.  This Newberry-award winning book takes place in Connecticut in 1687.  Things seem to have relaxed just a bit in the Puritan colonies compared to the time we read about in our last bedtime read aloud, Puritan Adventure.

(I just looked back at my last Book Discoveries/Read Aloud Thursday post, and I think we finished that one about three weeks ago…so this was a long read — though there were a few nights we missed reading together!)

But like Puritan Adventure, The Witch of Blackbird Pond is the story of an outsider who doesn’t quite fit in.  Kit grew up in Barbados, raised primarily by her grandfather.  After her grandfather’s death, Kit decides to travel to New England to live with the only family she has — an aunt and uncle she has never met.

Kit often feels out of place, and befriends others who feel out of place — including an old woman living alone near the pond.  Hannah, the so-called “witch” of blackbird pond is really not a witch at all.  She is, however, a Quaker — someone the townspeople dislike just as much apparently (and this difference of belief leads many people to let themselves think she must be a witch).  Kit subverts her uncle’s desires and continues a friendship with Hannah, while meanwhile she tries to maintain a respectable face with her family and in the town.  She teaches in the dame school, and is courted a wealthy young man in town.

There are themes of romantic love in this story (both for Kit and for her two cousins), and of course the battle Kit faces between her free-spirited upbringing and the “respectable” life she should be learning to lead in New England.

Early on in the book I wondered if this book would be a bit much for Miss M to follow (the love stories are a bit complicated, as well as some of of the political disagreements the townspeople have), but she kept telling me she was enjoying the story and wanted to know what would happen, so we pressed on.  This book was much easier to read aloud than Puritan Adventure, since Speare made very little attempt at period dialog in her book!

I’m glad we read this book, though I think we easily could have saved it for our next go-around with American history in three or four years — I think a middle-schooler would really enjoy this as an independent read.  And very likely Miss M will read it for herself anyway when we get to that point.  🙂

Totally not important — but I really like the cover image above…the copy of the book we have (purchased at a thrift store) has this cover.  Much uglier!

I’m linking up with Read Aloud Thursday at Hope is the Word!

3 Responses to “Book Discoveries this Week: The Witch of Blackbird Pond”