Yesterday and today I’m catching up on recapping our US History studies.  We finished studying the Revolutionary war back in November, but I just wrote about that yesterday.  We just finished our unit on the post-Revolutionary war years in mid-January, so it’s still a bit fresher in my my mind.   🙂

This unit in our American history studies covered the years from 1783-1815.  There are several major topics in this time period, including the forming of our nation’s government, the writing of the constitution, the Louisiana purchase, the explorations of Lewis and Clark and the War of 1812.

As in our earlier units we used a book by the Maestros (A New Nation) to give us an overview of this time period.  I also read aloud Year of the Horseless Carriage 1801 by Genevieve Foster.  You can read my thoughts on that book here.  While some of it was overlap with A New Nation, most of it was pretty complementary.

Not including Christmas break, we spent six weeks on this unit.   This was the first unit for

which I actually under-estimated the time it would take us.  When I did my planning for the year I thought there would not be very many topics to cover and I only planned four weeks.

Longer Read-Alouds (Linked to blog posts about these books):

Justin Morgan Had a Horse

Bears on Hemlock Mountain (not really all that long, but read aloud to all the kids)

The “Caroline” American Girl books — Caroline is the newest historical American Girl, and she lives during the time of the War of 1812.  Miss M got the first book in the Caroline series for Christmas, and read all six books in the series of her own volition over Christmas break.

The Cabin Faced West by Jean Fritz — I think this was Miss M’s favorite of her assigned fiction reading for this time period.

The Story of Eli Whitney by Jean Lee Latham — I thought Miss M would like this because she generally likes stories about inventors…but this one, not so much.  It was a challenge for her to get through this assigned reading.  While I normally don’t really push her to read things she doesn’t care for, I do it every now and then just because I think it’s a good discipline for her to learn for the future. 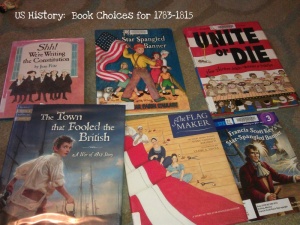 Our book basket of picture book fiction and and non-fiction was a bit lighter for this unit than for some previous units.  My US History Year One spreadsheet lists a number of the titles — at least the ones I planned on getting ahead of time.  🙂  I also found a number of picture books for this time period on the shelves at the library — including more titles about the constitution, our country’s early presidents, and the Lewis and Clark expedition.

Unfortunately I didn’t write down all these titles! One that stands out among the titles I found on the shelf at the library is Unite or Die: How 13 States Became a Nation by Jacqueline Jules, illustrated by Jef Czekaj.   The story of the problems faced as a new government was formed after the Revolutionary War is framed as group of kids putting on a play about the states (dressed in state-shaped costumes!).  A little bit of humor goes a long way to make the details of this topic more interesting.  🙂