Filed under: Getting Organized,Spelling — kirstenjoyhill @ 2:56 pm
Tags: logic of english

I finally got around to organizing all my Logic of English flash cards and game cards last night! This project has been a few months in the making.  😉 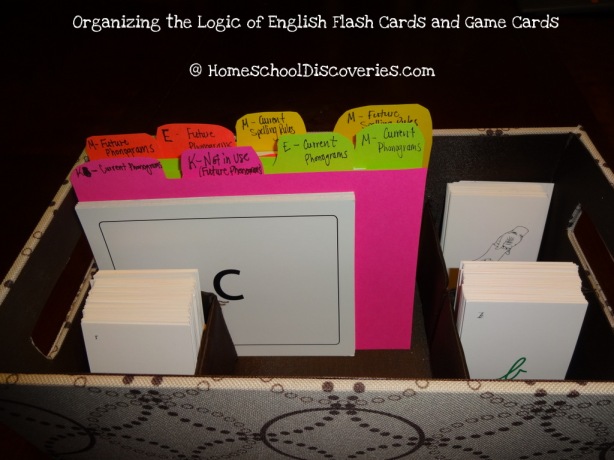 With only one student doing a Logic of English program, organizing the phonogram flash cards was pretty simple.  I kept a pile handy of the cards we were working on, and the rest were in a drawer in a baggie or held together with a rubber band.  Even adding a second student, Mr E, didn’t cause too many problems at first because I was going through the Essentials program very slowly with him and not using too many cards.   At this point I also wasn’t making very good use of the spelling rule cards, so those just sat mostly unused in another bag.

But chaos broke loose with my phonogram cards once I started Mr. K in the Foundations program and transitioned Mr. E to this program as well.  Now I had stacks for cards Mr. K was using, cards mastered by Mr. E but not by Mr K (but that Mr K will need in upcoming lessons), cards currently needed by Mr. E, cards needed by Miss M, cards Miss M had mastered but were not needed yet for Mr E and finally cards no one is using yet (but of course Miss M will need in the upcoming weeks).  Oh, and plus those spelling rule cards! Whew, that’s a lot of cards!

The Logic of English flash cards are a bit of a challenge to organize because they are bigger than typical 4×6 cards, and are also too wide to fit in many of the other random plastic boxes I had around the house or could easily find at Target.

After much searching online and asking for advice on forums, the best option I came up with at first is the box I purchased (see the picture above — or here on the Target website). I liked the fact that the game cards also fit in the box, but I was a bit disappointed not to have a storage box with a lid!  I’ve found what I think will be safe place to store the box so that it’s less likely to be tipped over by our curious toddler.

After I bought this box I did find a couple of options for 5×8 file card boxes that close with a lid (here and here).   I’m going to see how things go with the box I purchased, but I’ll be keeping this type of box in mind for the future if we have too many spills of the no-lid box.  😉

In order to avoid buying special large divider cards, I made some using cardstock — I just needed to trim a bit off the side of a standard letter-sized piece, and then cut each piece in half.  I then hand-cut the tabs (as I’m sure you can tell from their uneven sizing!).

As of right now the game cards aren’t very well organized.  They are just separated into three groups – cursive, bookface, and special cards.  A project for a future day would be to organize them better by who might use them for a game.