…A School Room that is.  We have one…but it hasn’t been used for “school” nearly as much this last year as it was at first. 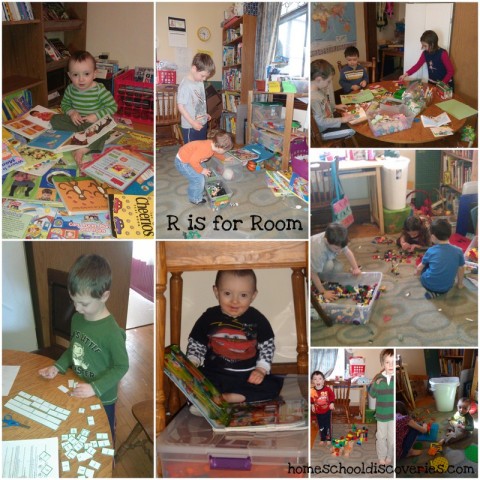 When we first moved into our current house, Miss M was just beginning Kindergarten.  Being that all three of our kids (at the time) shared one bedroom, there wasn’t much room in there for toys.  Our other main-floor bedroom was a playroom/schoolroom.

By January of 2012, Miss M now had three younger brothers instead of two, and she was ready for her own room.  We were also ready for the school room to be a bit quieter place.  So Miss M moved upstairs, and the playroom/schoolroom became a mostly school room, with a few quieter toys.    Here’s a blog post about our overhaul of the play/school room.

This past year, Miss M started doing more independent work — most of which she did at her desk in the school room.  I also found myself often working with Mr. E  while Miss M worked independently — and our talking made it difficult for Miss M to focus.   I had to look all the way back to October to see a school-work “action shot” taking place in the school room (not counting Miss M working at her desk, which she doesn’t really like me taking pictures of).

Meanwhile, Lego play has become more and more of a “big deal” for the two older boys.  And the Legos are in the school room as well.  It’s a catch-22: They are in the school room distracting the big sister…or they are in the boys room with the toddler (and then we either have to keep the toddler out of the room with all his toys or allow him to run amok with the Leogs!).  So, they stay in the school room most of the time, and sometimes we make a rule that they cannot come out until school is done for the day.   But that’s hard for the boys since they are done with their school obligations much earlier than their big sister.

I haven’t really figured out the solution to this problem yet.  I would love to find a way to move Miss M to a different spot in the house for her independent work…but she is the type who does not like change and is resisting the idea of being anywhere else in the house.  I’m glad we aren’t starting back to a full schedule until the day after Labor Day this year — because I still need some time to figure this out!

I’m finally caught up on my alphabet posts and I’m linking up to Blogging Through the Alphabet this week at Ben and Me!  I’m also linking up to the School Rooms post at the Not-Back-to-School Blog Hop! 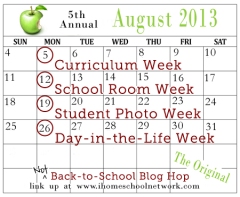 One Response to “R is for Room”